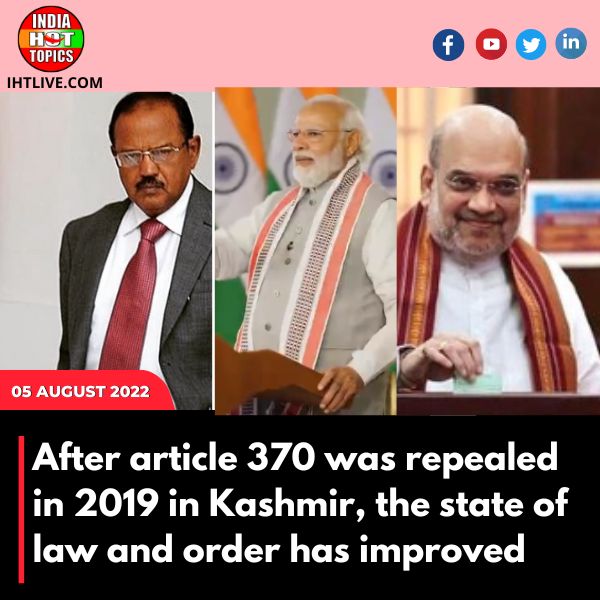 After article 370 was repealed in 2019 in Kashmir, the state of law and order has improved

If a comparison between 2016-2018 and 2019-2021 data recorded by the Home Ministry and J&K police is made, it is clear that the security situation in the union territory of Jammu and Kashmir has significantly improved three years after the Narendra Modi government repealed Article 370 and 35 A.

The situation in the valley is normal despite Pakistan observing a Black Day and separatists calling for a bandh, with the exception of subversives posting some posters in Sopore and a grenade attack against a Muslim labourer from Bihar in Pulwama last night. No incidents of stone-throwing, street fighting, or closing of schools or colleges have occurred up to this point.

Between the three years prior to August 5, 2019, and the three years following the abrogation, there was a 600% decrease in law and order incidents thanks to pressure from Home Minister Amit Shah, National Security Advisor Ajit Doval, and JKP police led by DGP Dilbagh Singh. If the two three-year periods are compared, extremist-related incidents have decreased by 21%, according to data gathered by the Home Ministry and the JKP.

While there were 166 terrorists operating in the Kashmir and Jammu regions as of July 31, 2022 (86 locals and 80 foreigners), there were up to 44 top terrorist commanders killed in 2021, and 18 top terror commanders have been killed so far. A further indication of the increase in counter-insurgency operations is the discovery of no fewer than 11 tunnels over the past ten years, including seven cross-LoC tunnels in Samba, two in Kathua, and two in the Jammu sector.

The fact that these incidents in Kashmir have decreased by 600% in the three years since Article 370 in Jammu and Kashmir was repealed, compared to the three years before, is the key sign of an improvement in the law and order situation. Data indicates that between August 5, 2016, and August 4, 2019, there were 4,894 law and order incidents in the Valley. Only 804 such incidents were reported in the Valley between August 5, 2019, and July 31, 2022, three years after the Narendra Modi government revoked Jammu and Kashmir's special status and divided it into two Union territories.

The data also reveals that, in the three years prior to August 5, 2019, 116 civilians had died in terror-related incidents in Kashmir, compared to 126 in those same three years.

Another achievement was the assassination of senior militants from terrorist organisations based in Pakistan, including Lashkar-e-Toiba and Jaish-e-Mohammed. Up until July 31 of this year, 18 top militants had been killed, including 11 from LeT, 5 from JeM, and 2 from Hizbul Mujahideen. 44 people in total, including 26 LeT members, 10 JeM members, 7 HM members, and 1 Al-Badr member, were killed by security forces in the Valley last year.