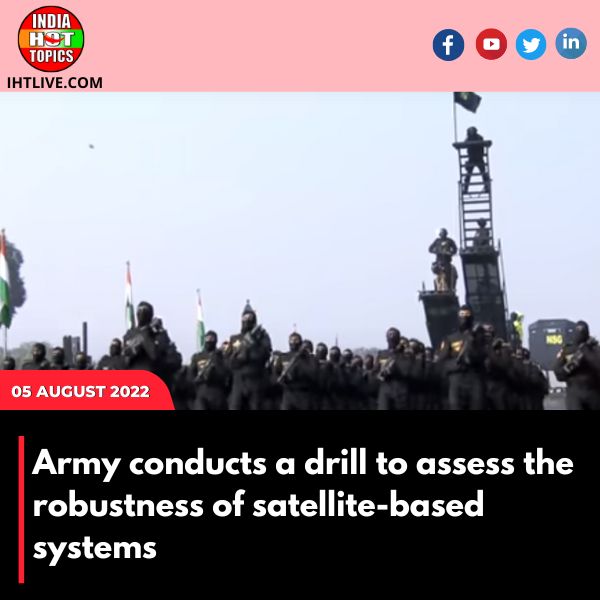 People with knowledge of the situation said on Friday that the Indian Army tested the operational readiness of its satellite-based systems deployed throughout the nation last week during a complex exercise intended to validate and demonstrate the resilience of its communication capabilities in case terrestrial connectivity is disrupted in future conflicts.

During the covert exercise known as Skylight, which took place from July 25 to July 29, the entire range of the army's satellite communication resources were activated, according to one of the officials cited above who asked to remain anonymous. The exercise took place at a time when the army is carefully examining various aspects of the Russia-Ukraine war to draw lessons about communication technology.

"To support a range of military operations, we must use space capabilities. Due to topographic difficulties, the northern borders with China are of particular concern, he said.

"It is important to build and refine technical competence in this field as complex aerospace technology has begun impacting military operations, and communications in particular."

According to the officials, the army uses a number of Indian Space Research Organisation (ISRO) satellites and is connected to them via hundreds of different types of communication terminals, including static, vehicle-mounted, and man-portable terminals.

"During the exercise, all of the army's satellite communication resources were activated, and different technical and operational space domain scenarios were simulated. ISRO and other organisations in charge of the ground and space segments participated.3

As terrestrial systems are inevitably disrupted during a conflict, experts predicted that space-based communications will prove to be crucial.

"In light of the lessons learned from the Russia-Ukraine war, the army is taking steps to improve the functionality of its space-based systems. According to Lieutenant General Vinod Bhatia, a former director general of military operations, "space will be a critical domain in new-age warfare and it will affect the outcome of military operations" (retd).

The Indian Army does not currently possess a dedicated satellite, in contrast to the Indian Navy and Air Force. By December 2025, the army will have its own satellite.

An additional official stated that "the indigenous multiband satellite with advanced security features will support tactical communication requirements of not only troops deployed on the ground but also remotely piloted aircraft, air defence weapons, and other mission-critical and fire support platforms."

In order to enhance its operational capabilities, the army proposed a GSAT-7B satellite, which was approved in March by the Defence Acquisition Council, the government's top weapons procurement body. Advanced satellites in the GSAT-7 series, created by ISRO, are intended to enable communication between users over great distances, including oceans.

The military has also thoroughly examined electromagnetic and cyber warfare in the conflict between Russia and Ukraine and determined the effectiveness of a dependable satellite communication system like Starlink that can deliver high-speed internet services to remote areas.

An important takeaway from the conflict, according to the officials, was the necessity of a tactical communication system that can be used in a hostile environment and has an appropriate backhaul.

"For the implementation of complex satellite communication projects, there will be an increased level of collaboration with the private Indian space industry. The army maintains contact with a number of start-ups, micro, small, and medium-sized businesses, as well as IN-SPACe [Indian National Space Promotion and Authorisation Centre]. This will fuel the goal of an independent India, or "Atmanirbhar Bharat," according to the fourth official.

One of the officials added that traditional cryptographic systems can be quickly completely or partially cracked with quantum computers, jeopardising sensitive systems. The army is also concentrating on using quantum computing to improve information secrecy and working with business and academia to develop applications for communications and cryptography.

He continued, "The army is closely monitoring developments made by India's adversaries in this field to ensure that it quickly introduces vital capabilities."