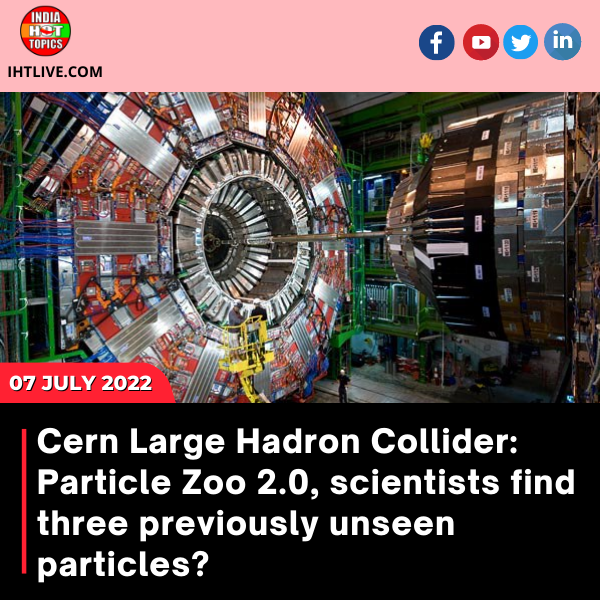 The elusive "God particle" or Higgs Boson, which is assumed to have been crucial for the creation of the universe after the big bang 13.7 billion years ago, was discovered by the Large Hadron Collider. A 27 kilometre long LHC is located at CERN.

Facts about the Large Hadron Collider discoveries 3 new particles or so
The first pair of "tetraquarks" and a new variety of "pentaquark" have both been seen by researchers.
These quarks will improve physicists' comprehension of how quarks combine to form composite particles.
The proton and neutron that make up atomic nuclei are made up of hadrons, which are elementary particles that often join in groups of two and three to form quarks.
They can also unite to form tetraquarks and pentaquarks, as well as four- and five-quark particles.

These three unusual particles were created within the collider when two high-energy particle beams collided.
In the third run, the collisions reached a record energy of 13.6 trillion electron volts (TeV). It will keep running for another four years.

Niels Tuning, a physicist, claimed that when more analysis are conducted, more diverse unusual hadron types are discovered. He added that they were living through a similar time of discovery to the 1950s, when a "particle zoo" of hadrons was found, which eventually gave rise to the quark model of conventional hadrons in the 1960s. Particle Zoo 2.0 is what we're making.

The purpose of the Large Hadron Collider (LHC), a massive and intricate device, is to investigate particles, the tiniest known forms of the universe's building elements.

On July 5, 2022, the Large Hadron Collider was successfully restarted a third time. Ten years have passed since it helped researchers track down the elusive "God particle." Higgs Boson is a tool that researchers plan to utilise to uncover more information about the cosmos and its mysteries. In 2012, the Higgs boson particle was found.