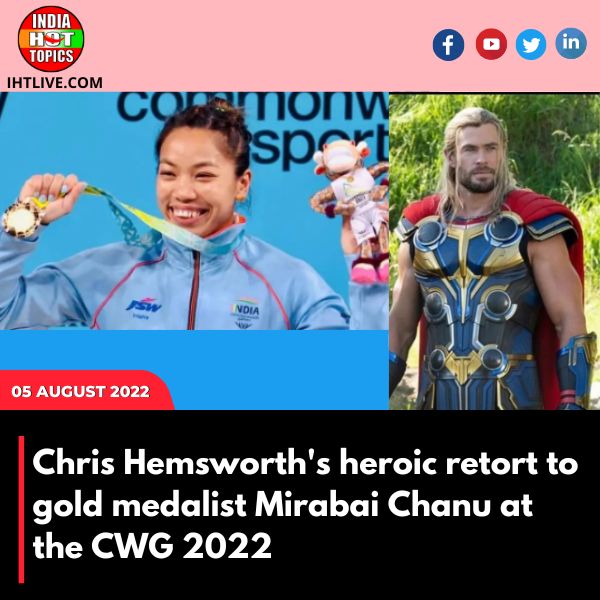 At the ongoing 2022 Commonwealth Games, Mirabai Chanu broke four records in a record-breaking performance to win India's first gold medal. The Olympic silver medalist broke both the Commonwealth and Games records in snatch, finishing the main event with a total lift of 201 kg (88 kg 113 kg).

After winning silver and gold in the Glasgow and Gold Coast editions, respectively, Chanu, 27, now has three medals total. Twitter went into overdrive to celebrate Chanu's success, and Chris Hemsworth was one of her fans. He praised the Indian "legend" but added a Thor twist.

In a tweet honouring Chanu's outstanding performance at the Games, a supporter who included Hemsworth in the tweet wrote, "Time for Thor to lay down his hammer." "She is deserving! Best wishes, Saikhom, you legend, "Hemsworth answered back.

Chanu had tweeted after winning gold, "Lifting 201kg never felt easy, but thanks to the love and wishes of billions back home, every challenge is just an attempt away."

Following Chanu's success in Birmingham, there were wild celebrations throughout the entire nation. Folk dance was performed in her hometown of Imphal to celebrate receiving the medal.

Tombi Devi, her mother, claimed that she prayed constantly for her daughter to win and was unable to sleep the night before the competition. "She makes me so proud. To watch her event, we stayed up late the day before. Her sisters, kin, and neighbours are currently celebrating with the tricolour and performing the traditional Thabal Chongba dance, among other activities."

Most of her competitors, including Pakistani weightlifter Nooh Dastagir Butt, who won his nation's first gold medal in Birmingham, have found inspiration in Chanu.

"We find inspiration in Mirabai. She has demonstrated to us that South Asian nations can also bring home an Olympic medal. When she won silver at the Tokyo Olympics, we were so proud of her," Butt told PTI after his record-breaking show in the men's 109+kg finals.