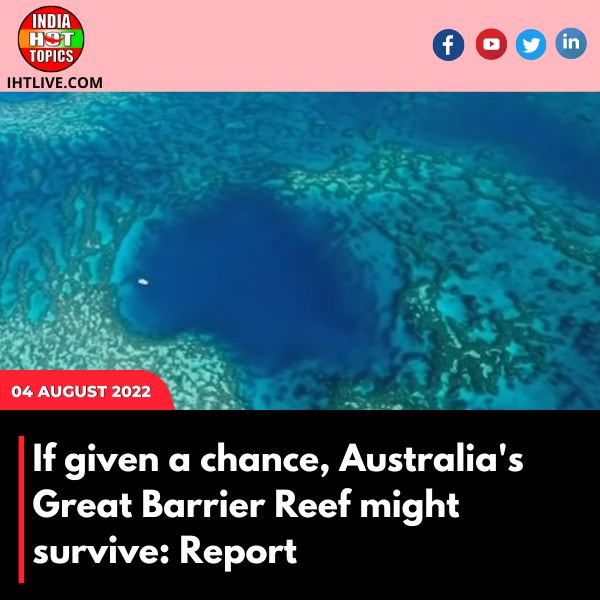 If given a chance, Australia's Great Barrier Reef might survive: Report

According to a government report released on Thursday, portions of Australia's troubled Great Barrier Reef now have the highest levels of coral cover seen in decades, suggesting the underwater wonder could survive given the chance.

The Australian Institute of Marine Science reported that portions of the enormous UNESCO World Heritage Site displayed a noticeable increase in coral cover in the previous year, reaching levels not seen in 36 years of monitoring.

In 87 sites, scientists found that the northern and central portions of the reef had recovered from damage more quickly than some had anticipated, largely because of the branching coral Acropora, which grows quickly and is home to thousands of marine species.

The CEO of the Australian Institute of Marine Science, Paul Hardisty, said the most recent findings "demonstrate the reef can still recover in periods free of intense disturbances."

Hardisty did not, however, declare victory and cautioned that the gains could easily be undone by cyclones, fresh bleaching incidents, or crown-of-thorns outbreaks. He indicated a change in fortunes for the southern part of the reef, which was once thought to be improving but was now declining once more. This demonstrates how susceptible the reef is to persistently severe disturbances, which are happening more frequently and lasting longer, he said.

Sites monitored in the northern part of the reef now have a 36 percent increase in coral coverage, up from a 27 percent level in 2021.

The picture, however, became less encouraging as the researchers moved south, with a noticeable decrease in coral cover in the south and a less dramatic increase in cover in the reef's central belt. The spread of crown-of-thorns starfish, which destroy coral, has also had a negative impact.

Only tenacious lobbying by the Australian government prevented the reef from receiving UNESCO's "in danger" designation, which could have dealt a fatal blow to the nation's multibillion-dollar tourism sector. Many worry that the reef will eventually be completely destroyed due to the rapid rate of damage.

The regrowth of coral, according to marine scientist Terry Hughes, is "good news," but he cautioned that the species that are fueling the recovery are extremely vulnerable to ocean warming. The large, aged, slow-growing corals that had defined the reef, he continued, were likely to be replaced "not anymore attainable. Instead, we are witnessing the partial reassembly of weedy corals before the upcoming disturbance."

Overly optimistic thinking should be avoided, according to Zoe Richards, a researcher with Curtin University's Coral Conservation and Research Group. She claimed that a small number of Acropora species, which frequently exhibit boom-and-bust growth patterns, are responsible for the recovery trend. This implies that the following instance of thermal stress could easily wipe out these coral communities once more.

The short-term success of a small number of rapidly expanding coral species hides the true picture of the biodiversity losses, which are largely unknown. We are already discovering evidence that each mass bleaching event causes local extinctions of rarer species.