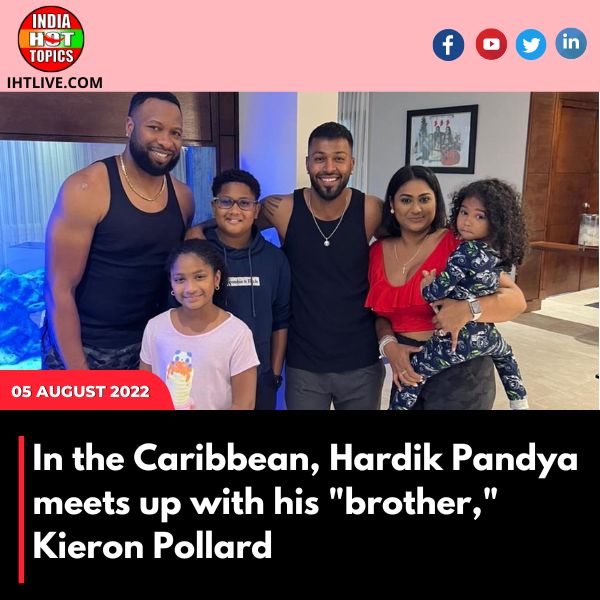 In the Caribbean, Hardik Pandya meets up with his "brother," Kieron Pollard

Kieron Pollard, a former teammate of Hardik Pandya's from the Mumbai Indians, caught up with him while Pandya was away performing national duties in the Caribbean. The all-rounder player went to Pollard's house and posted pictures of it online. Hardik has joined the team for the five-match T20I series, which the Men In Blue are currently leading 2-1. It is a limited-overs series between India and the West Indies.

"A visit to the King's residence is a must on any Caribbean vacation. Thank you for hosting me, my brother, Polly, my favourite, and your lovely family, the Indian wrote alongside the photos.

The final two games will be played in Lauderhill, Florida on August 6 and August 7 to conclude the series, which consists of three ODIs and five T20Is.

Pollard and Hardik once played together for the Mumbai Indians, and they have experienced some special times together both on and off the field. But in the prior edition, Pollard remained with the Mumbai team while Hardik joined the Gujarat Titans and was given the captaincy. In their first game, he led the team to the IPL championship.

Although the two all-rounders no longer share a dressing room, their friendship is still very strong.