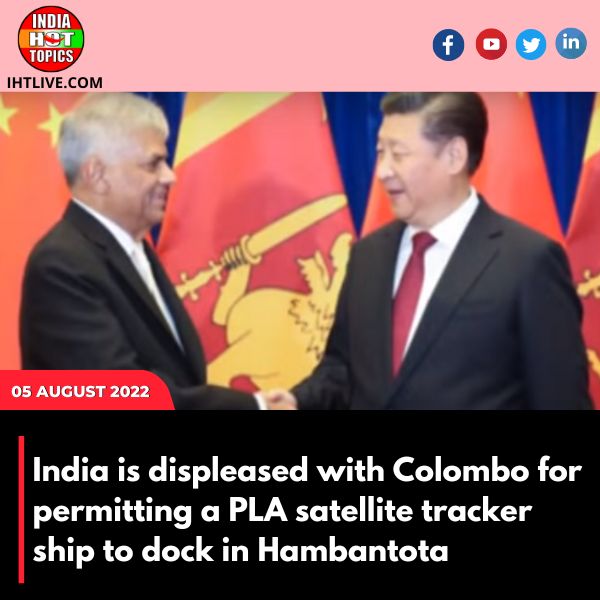 Despite strong opposition from the Indian Navy, the Chinese Space and Satellite Tracking ship Yuan Wang 5 is on its way to the port of Hambantota that China has leased in Sri Lanka on August 11.

A guided missile destroyer of the Luyang class equipped with a Type 071 Landing Platform Dock (LPD) is also transiting the Indian Ocean on its way to the Chinese base in Djibouti, which is located on the eastern coast of Africa.

It is believed that the Wickremesinghe administration was coerced into allowing the Chinese ship entry into Hambantota port by Beijing's envoy to Colombo, who made it clear that refusal would have an adverse effect on bilateral relations.

The strategic surveillance ship was only coming to refuel, according to the Sri Lankan Cabinet Spokesperson, who went on record on August 2 despite the Indian Navy objecting to the ship's docking. According to spokesman Bandula Gunawardana, "President told the cabinet that diplomatic efforts will be made to work with both countries so as to not create any issues."

Whatever the diplomatic jargon used by Colombo to defend the entry of the Chinese ship into Hambantota, the fact remains that Sri Lanka owes more than 10% of its external debt to China because it borrowed money from the Chinese Exim Bank at high interest rates to fund useless projects like the port and airport in Hambantota. Simply put, Colombo, like Islamabad, is a brand ambassador for President Xi Jinping's Belt Road Initiative (BRI), and Sri Lanka cannot afford to irritate China.

India, for its part, has not liked this move by Sri Lanka because the military ship is also engaged in ocean mapping, which is important for Chinese PLA Navy anti-submarine operations.

The apparent rejection of India comes as the Modi administration has made great efforts to assist Sri Lanka during its ongoing economic crisis by allocating more than USD 3.5 billion for the purchase of food, fuel, and cooking gas supplies.