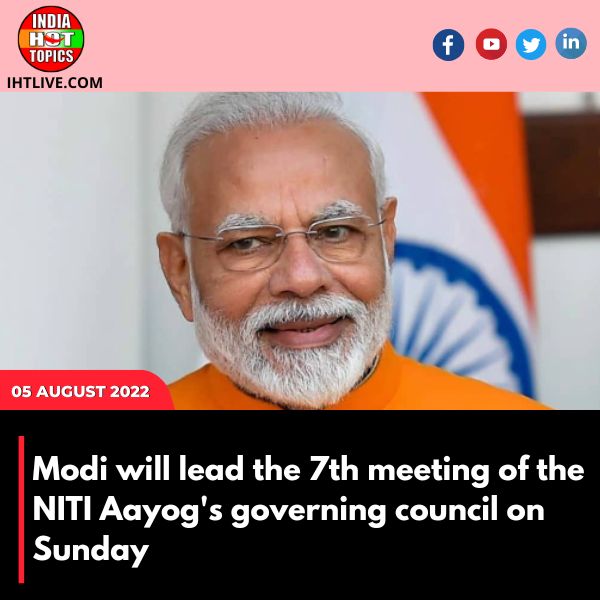 The seventh governing council meeting of the NITI Aayog will be presided over by Prime Minister Narendra Modi on Sunday to discuss matters pertaining to agriculture, education, and the economy.

The meeting, which is being held in person for the first time since 2019, will be attended by chief ministers, lieutenant governors of union territories, union ministers, members, and the vice-chairman of NITI Aayog. Due to the Covd-19 pandemic, the first such meeting was held in February 2015 and was postponed in 2020.

The National Education Policy's implementation in school education, higher education, and urban governance are all on the agenda of the meeting, according to NITI Aayog. Crop diversification and achieving self-sufficiency in oilseeds, pulses, and agri-communities are also on the agenda.

The meeting, according to officials, is intended to "finalise the road map and outcome-oriented action plan" on the topics up for discussion. According to the statement, "it provides one of the most significant forums for discussions between the Center and States and identifying key strategies for cohesive action with a whole-of-Government approach."

As part of the preparation for the meeting, Modi presided over a gathering of chief secretaries in Dharamshala in June. At the conference, there were discussions on the necessity of greater Center-state coordination to guarantee the last-mile delivery of government programmes as well as other crucial issues.

Modi urged each state to recognise its strengths, establish its goals, and create a road map to reach them in his speech to the conference. "To grow to a five trillion dollar economy, India needs this. The creation of jobs and future development will be largely dependent on urban areas. Therefore, it is necessary to strengthen local government structures in cities and implement creative urban planning.