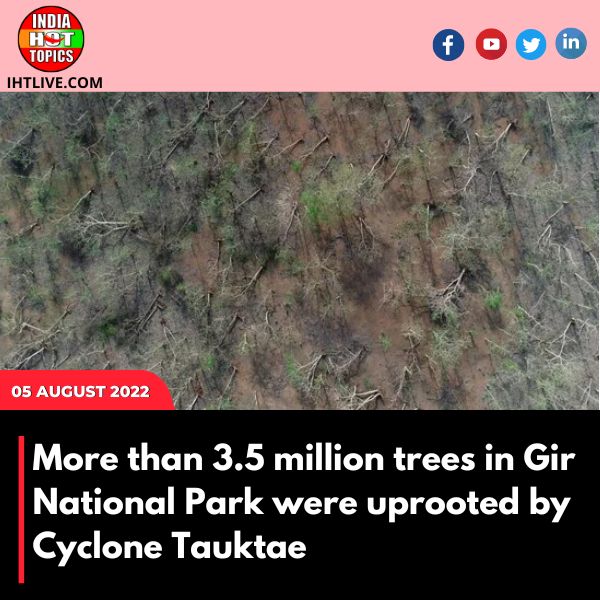 More than 3.5 million trees in Gir National Park were uprooted by Cyclone Tauktae

The state forest department has determined after numerous surveys that Cyclone Tauktae uprooted over 3.5 million trees in Gujarat's Gir National Park when it tore up India's west coast in May 2021, despite the fact that experts said the loss has a silver lining as lions frequently prefer open landscape. However, worries persisted that if the trees were left bare, big cats and other wildlife might eventually be forced outside the sanctuary's perimeter.

H S Singh, a member of the National Board for Wildlife, stated that when the trees become dry and threaten lions, whose population has stabilised in Gir over the past 10 to 12 years, they will also present a significant risk for forest fires. Nilgai [Blue Bull], a herbivore, might not be able to move around freely.

According to him, lions do, to some extent, prefer open spaces, but trees should be taken out of places where wildlife frequently moves through. Not all trees must be cut down; only about 40% must.

Given that there are more of them than there were trees damaged in Gir (over 2.8 million) during the cyclone that hit Gujarat in November 1982, it is unlikely that the trees will be removed any sooner. Singh stated that it took roughly three.

Over a year after Cyclone Tauktae, the forest department submitted its final report on the downed trees. Based on the harm done in 1982, it initially pegged their number at between 3 and 4 million in May of last year. Before arriving at the final figure, the department first calculated that 30 percent of the trees in Gir were uprooted using satellite data.

A copy of the report provided to the government outlining the surveys, including the final one, has been examined by HT.

Under the condition of anonymity, a forest department official pointed to inconsistencies in the preliminary findings and said a special task force was later established to conduct the post-monsoon survey last year.

The exercise to remove the fallen trees has started, according to Aaradhna Sahu, the chief conservator of forests in Junagadh, where Gir is located, in order to ensure the freedom of movement of wild animals and to prevent forest fires. "I cannot claim that the lions have suffered a negative effect."

The forest department might decide not to remove many fallen trees because they are likely to regenerate.

The first few seconds after an Asiatic lion reaches its top speed are critical for hunting, according to Jalpan Rupapara, a lion researcher in Gir. If the uprooted trees are removed, more open spaces will be created that lions will prefer, especially for hunting. "If there is an obstacle in its path due to uprooted trees, it will not be able to chase its prey.

Between 2010 and 2015, the number of Asiatic lions increased by 27%. According to a 2018 study by additional principal chief conservator of forests A P Singh, the growth inside Gir's protected areas was only 3%.

The satellite population increased by 97% outside of protected areas. The habitat is suitable for herbivores as evidenced by the 51 percent increase in herbivore population over the course of five years. Therefore, in order to increase the carrying capacity of the Asiatic lion in Gir protected areas and to subsequently control herbivores for future management, habitat intervention and manipulation are necessary, according to the paper.

Gir cannot be left to the whims of nature, according to Uday Vora, a former chief conservator of forests (wildlife). "The uprooted trees need to be removed quickly. Gir requires tree thinning. It is unfavourable for lions if the ground area density of the green cover is greater than 60%. Lions prefer open spaces, so the impact of the fallen trees in the sanctuary may not be as great as it might be.

According to some experts, Gir was becoming more crowded and changing into an unusual lion habitat as a result of better protection. The sanctuary's thinning was a part of the forest department's 2015 forest management plan. Prior to the coronavirus pandemic in 2020, the department began working on the plan.