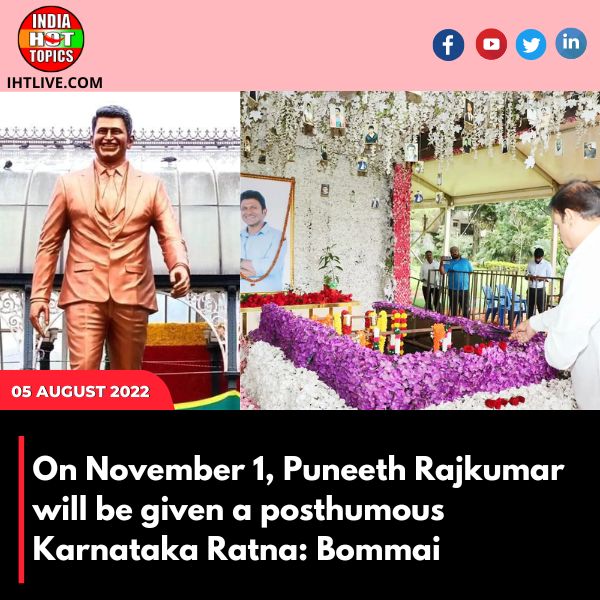 On November 1, Puneeth Rajkumar will be given a posthumous Karnataka Ratna: Bommai

On November 1, which also happens to be Kannada Rajyotsava, the day the state was founded, Kannada film actor Puneeth Rajkumar—who passed away last year—will be given the "Karnataka Ratna" award posthumously, according to Karnataka Chief Minister Basavaraj Bommai.

He will be the state's highest civilian honor's 10th recipient. Puneeth Rajkumar will receive the Karnataka Ratna award on November 1. A committee made up of Rajkumar family members will be formed to prepare for the ceremony, according to Bommai.

After opening the annual Independence Day flower show at Lalbagh's glass house, he began speaking. A special floral tribute is paid to Kannada actor Dr. Rajkumar and his son, actor Puneeth Rajkumar, at this year's flower show. Puneeth, the youngest of Dr. Rajkumar's five children and widely regarded as the leading star of Kannada cinema, passed away on October 29 at the age of 46 after suffering a cardiac arrest.

At the "Puneetha Namana," an event to honour Puneeth Rajkumar, organised by the Karnataka Film Chamber of Commerce (KFCC) in collaboration with Sandalwood film actors' and technicians' associations, the Chief Minister had announced that the late actor would receive the award.

Puneeth, also known by his fans as "Appu" and "power star," made his screen debut at the age of six months and later won a national award for best child actor for the movie "Bettada Hoovu." He later made a comeback as a leading man in 2002 and went on to star in 29 movies, including some blockbusters.

Bommai noted that the flower show, which has been running since 1922 and draws a sizable crowd, has a special significance this year because it marks the 75th anniversary of India's independence and that thousands of people will be arriving tomorrow for the next ten days to see the show.