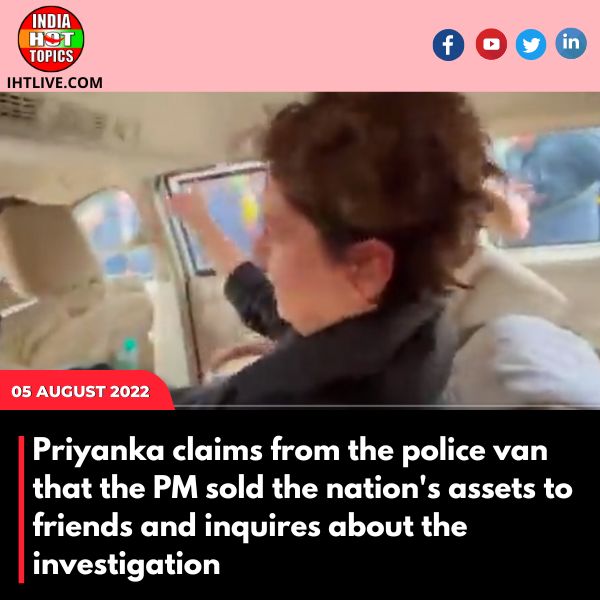 Priyanka Gandhi Vadra, the general secretary of the Congress, said on Friday that the opposition's voice cannot be silenced after being detained by the Delhi Police during the party's extensive protests in the capital. Rahul Gandhi and other Congress leaders were detained as they marched towards Rashtrapati Bhavan protesting the unemployment rate, rising prices, and GST on necessities.

Vadra criticised the Centre while he was in a police van for failing to acknowledge how the increase in prices was affecting regular people. In a video tweeted by news agency ANI, she is heard saying, "Since their ministers can't see inflation, we want to show them inflation by marching towards the PM's house."

Further, Vadra claimed that Prime Minister Narendra Modi had sold national assets "to his friends" and questioned why no investigations had been made. The Center has come under fire from the Congress frequently for using federal institutions to settle political scores. After Rahul Gandhi and Sonia Gandhi were called in for questioning by the Enforcement Directorate regarding a money laundering case connected to the National Herald newspaper, the party stepped up its accusation.

While the party protested, images showed Vadra leaping over a police barricade placed close to the AICC office as dramatic scenes played out in the nation's capital. She was later taken into custody by the Delhi Police. At Police Lines Kingsway Camp, Congress members Mallikarjun Kharge, Jairam Ramesh, and Ranjeet Ranjan were also detained.

In New Delhi, with the exception of the Jantar Mantar area, Section 144 of the CrPC had already been implemented by the Delhi Police prior to the Congress's call for nationwide demonstrations against inflation and unemployment.

The Delhi Police refused the party's request for permission to hold a demonstration outside of Modi's and President Droupadi Murmu's homes as part of a planned pan-Indian protest on Friday. The party continued its agitation anyway.