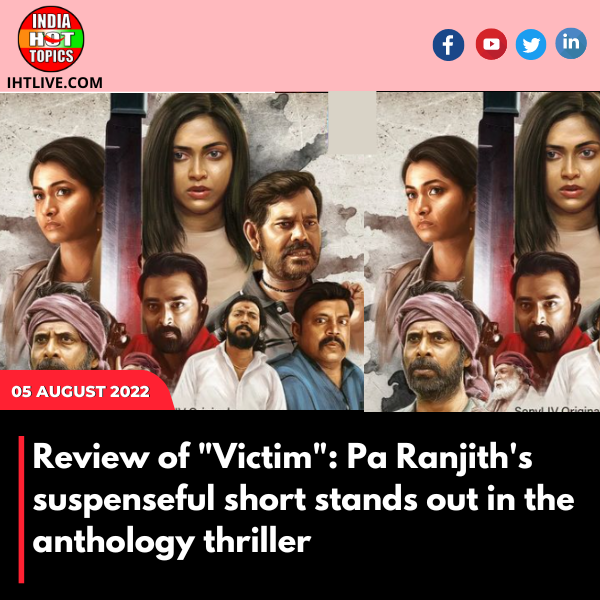 Review of "Victim": Pa Ranjith's suspenseful short stands out in the anthology thriller

Victim, an anthology series from Sony Liv, explores the stories of four different victims. One has the impression that the series, which was directed by Pa Ranjith, Venkat Prabhu, Rajesh M, and Chimbu Deven, could have been much more since only two of the shorts make a significant impression. Ranjith's short on land and its politics stands out among the rest because it is both hard-hitting and deeply moving while occasionally being squeamish. The second-best segment is by Venkat Prabhu, and despite stealing much of its basic plot from Joel Schumacher's Phone Booth, it mostly succeeds. Two additional short films by Rajesh M. and Chimbu Deven are awful.

In the lead roles of Pa Ranjith's Dhammam are Kalaiarasan and Guru Somasundaram. Ranjith is still an advocate for caste-based narratives, but this time he is concentrating on land politics. A middle-aged father and his adolescent daughter, who are busy preparing their small plot of agricultural land for the harvest season, are the main characters of the story. The father is forced to bear the costs when a dispute with the owner of the nearby acres of land gets out of hand. This beautifully filmed segment about how land still shapes a person's identity is powerful. It explains how people display their caste and power pride without ever considering the repercussions. Dhammam stands out due to the realistic performances, particularly the action scenes in the farmland.

Kottai Pakku Vathalum Mottai Madi Sitharum by Chimbu Deven is an intriguing fantasy comedy that explores our uncritical faith in deities. This story might have worked better as a stand-alone movie with stronger writing. However, as a part of this anthology thriller, it hardly even scratches the surface. The short, which stars Thambi Ramaiah and Nasser, examines how someone's desperation can cause us to lose the ability to distinguish between reality and illusion.

Mirrage by Rajesh M. is unquestionably the weakest short in the collection. The story revolves around a young girl (Priya Bavani Shankar), who is compelled to spend the night in an abandoned villa that her company has reserved.

She quickly begins to encounter some paranormal activity in the villa, and as she struggles to make sense of the situation, the plot twists and turns. This short's conclusion demonstrates why most thrillers no longer engage audiences when they are taken for granted.

The basic plot of Venkat Prabhu's Confession, which stars a vivacious Amala Paul and Prasanna, is taken from Joel Schumacher's Phone Booth. The performances help this short succeed to a large extent despite the recycled plot idea. As a driven young woman living life on her terms, Amala is very at ease. The short film looks at how quickly we form judgments about those around us based solely on appearance.