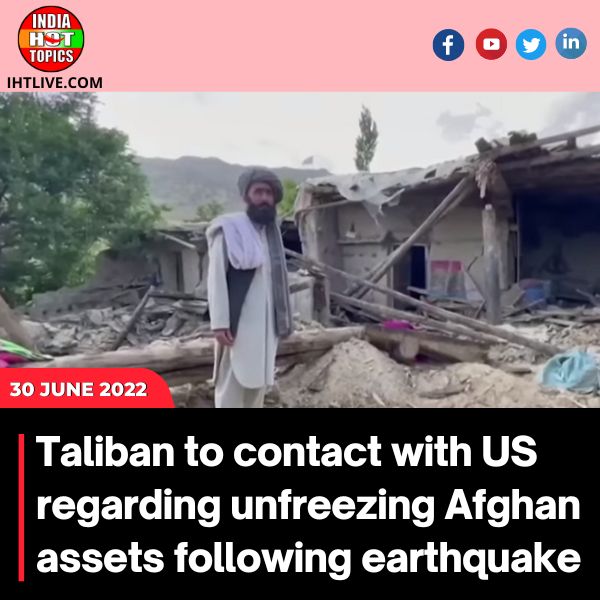 Taliban to contact with US regarding unfreezing Afghan assets following earthquake

Following a devastating earthquake, the United States and the Taliban are scheduled to meet in Qatar on Thursday to discuss unlocking part of Afghanistan's reserves. Washington is reportedly looking for a mechanism to guarantee that the money will go toward aiding the local populace.

The White House claimed to be "urgently" working on the initiative, while a board member of the Afghan central bank warned that it would take some time to complete.

Amir Khan Muttaqi, the Taliban's foreign minister, as well as representatives from the finance ministry and central bank arrived in Doha, the capital of Qatar, for discussions, according to Taliban foreign ministry spokesman Hafiz Zia Ahmed.

The United States is focused on a variety of concerns, including human rights and opening schools for girls, according to the State Department, which announced that its ambassador for Afghanistan, Tom West, would participate.

In order to further US interests, such discussions are necessary, according to a spokesperson for the US State Department, which does not recognise Taliban rule over Afghanistan. "None of these engagements should be seen as 'legitimising' the Taliban or its so-called government, but are merely a reflection of the reality that we need to have such discussions," the spokesperson added.

In August 2021, the Taliban seized power after the United States ended a 20-year military campaign.

At the time, Washington froze $7 billion in reserves and the international community stopped providing Afghanistan's estimated 40 million citizens with billions in direct aid.

Despite some aid being provided, the currency has fallen and the nation is in a catastrophic economic crisis.

The urgency of the financial discussion is increased by the 5.9-magnitude earthquake that struck eastern Afghanistan last week, killing over 1,000 people and displacing tens of thousands.

Shah Mehrabi, a member of the Central Bank of Afghanistan's Supreme Council, stated that negotiations were "underway" and that a final plan was "under consideration."

He told AFP that specifics of "the method to transfer the reserves to the Central Bank has not been finalised."

"It will take some time. These things take time to develop."

Karine Jean-Pierre, the press secretary for the White House, stated over the weekend that initiatives were being taken "to get these funds moving" out of the frozen reserves.

She told reporters she was travelling to Europe with President Joe Biden and said, "We are urgently trying to answer complex problems concerning the usage of these funds to ensure they serve the people of Afghanistan and not the Taliban."

The frozen deposits in question total $3.5 billion, which is half of the total amount the US government has blocked.

In the suburbs of the US capital, Montgomery College, Mehrabi, who is also an economics professor, stated, "I have proposed that these reserves should be released to the Central Bank."

For the purpose of paying for imports, he suggested a "limited, supervised release of reserves" of around $150 million each month.

That will lessen the suffering of families dealing with excessive inflation by helping "stabilise prices and help satisfy the requirements of regular Afghans so that they can afford to buy bread, cooking oil, sugar, and fuel," he said.

According to him, the usage of the money "may be independently monitored and examined by external auditing organisations with an option to terminate in the event of misuse."

The United Nations has issued a warning that there may be a food shortage in the country's lower half.

Prior to the earthquake, the United States announced that it was diverting help to organisations operating in Afghanistan and was putting about $55 million into the more urgent relief efforts.

The United States continues to view the Taliban as a terrorist organisation and has emphasised that addressing major problems, especially how women are treated, is a prerequisite for any breakthrough in relations.

In February, Biden gave the go-ahead for the other half of the frozen reserves to be used to compensate surviving victims and their families of the September 11 attacks, which sparked the invasion that resulted in the overthrow of the Taliban and the maintenance of a pro-Western government for two decades.