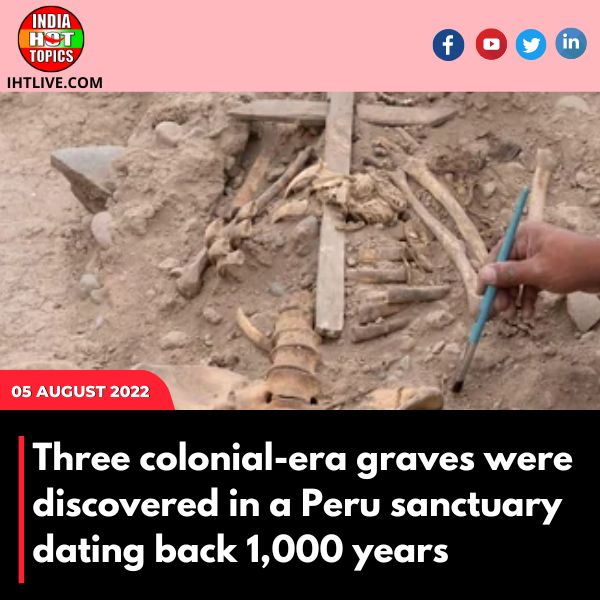 Three colonial-era graves were discovered in a Peru sanctuary dating back 1,000 years

According to a researcher, three burials from the Spanish colonial era were discovered by a team of Peruvian archaeologists on top of a pre-Hispanic temple that could be up to 500 years old.

From 1532, when the Spanish invaded and overthrew the Inca empire, until 1821, when popular uprisings led to independence, Peru was ruled by the Spanish for nearly 300 years.

According to Lucenida Carrion, director of the Park of Legends' archaeology department, "we are working with the hypothesis that the remains belong to a colonial cemetery."

Studies of the park's 54 archaeological monuments and sanctuaries date back many years.

The burials of two adults and a child, who were all wrapped in cotton cloth, were found at this summit, the archaeologist continued.

The cemetery is close to the pre-Hispanic "Tres Palos" temple, which is more than 1,000 years old and where the burial site is situated.

The area was inhabited by settlers from colonial Lima after the pre-Hispanic era.

Given the clothing, hair, and Christian crucifix that were discovered on one of the remains, Carrion stated, "We are considering whether the remains are from the colonial era.

This discovery is significant because it will enable us to determine whether the site has been continuously occupied since pre-Hispanic times.

The "Tres Palos" sanctuary was used by the Incas as a tambo (food deposit) during the 15th and 16th centuries, and adobe (mud and straw) homes were constructed during the colonial era.

Cross made of wood

"What is notable is the cross that one character is bearing on his chest. This cross marks the point at which the locals or inhabitants who once inhabited this area converted to Christianity "Carrion declared.

In addition to the brown wooden cross, other items found included sandals, bracelet pieces made of textile, funeral mantles, and ceramic vessel remnants.

The discoveries made by the archaeological team rank among the most significant in recent years and add to the analysis of numerous physical testimonies found inside the Maranga archaeological complex, which is close to Lima's coast.

According to the excavations at the site, its history dates back about 2,000 years, during which time it was inhabited by the Lima culture, the Ychsma, and then the Incas, according to Carrion.

The pre-Hispanic legends depicted at the enclosure's entrance inspired the creation of the 1964 structure known as The Park of Legends.

2018 saw the discovery of a 1,300-year-old cemetery from the pre-Hispanic Lima by a group of archaeologists.