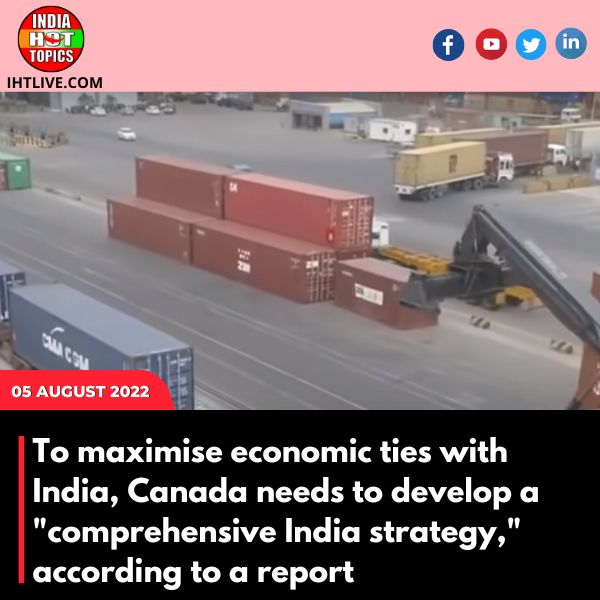 To maximise economic ties with India, Canada needs to develop a "comprehensive India strategy," according to a report

According to data from Ciuriak Consulting, Canada's global share of two-way goods trade with India has decreased from 1.02 percent in 2001 to 0.81 percent in 2021, according to the report. Canada has only contributed 1% of the growth in international exports of goods, services, and intellectual property to India over the past 20 years. Additionally, the underdevelopment of bilateral investment is concerning at a time when India is poised for an investment boom.

In one of the key international markets, Canada has been performing far below its potential, according to Ciuriak Consulting.

Canada's absence from the Indo-Pacific Economic Framework for Prosperity, which US President Joe Biden announced earlier this year in an effort to counter China's expanding influence in the region, served as a warning against Canada going missing in action.

"Canadian performance could and should be much higher. According to Ciuriak Consulting, our exports would be nearly two and a half times higher than they are now if our trade with India were on par with what we do with other countries with comparable-sized economies. That amounts to lost export opportunities worth more than $3 billion USD annually, it said.

Naturally, the Early Progress Trade Agreement (EPTA), which is currently being considered, will help close the gap, but the Comprehensive Economic Partnership Agreement will be even better (CEPA).

According to the report, a free trade deal "has the potential to deliver a greater economic boost to Canada than the 2018 Comprehensive and Progressive Agreement for Trans-Pacific Partnership (CPTPP), a deal that has succeeded in fostering trade relations with 10 other countries in the Asia-Pacific."

Simply put, India must be a part of any successful Indo-Pacific strategy, according to Business Council of Canada President and CEO Goldy Hyder. Canada should act quickly to secure a comprehensive trade and investment agreement so that it can be among the first advanced economies to do so, he continued.

Canada-India Business Council President and CEO Victor Thomas emphasised that "India is experiencing a massive economic surge and Canadian companies should have an actionable strategy to take advantage of this unique window of opportunity."

Canadian businesses and investors would have an advantage over rivals from many other nations if they signed a free trade agreement with India. By the same token, delaying action would disadvantage Canada, the report warned.