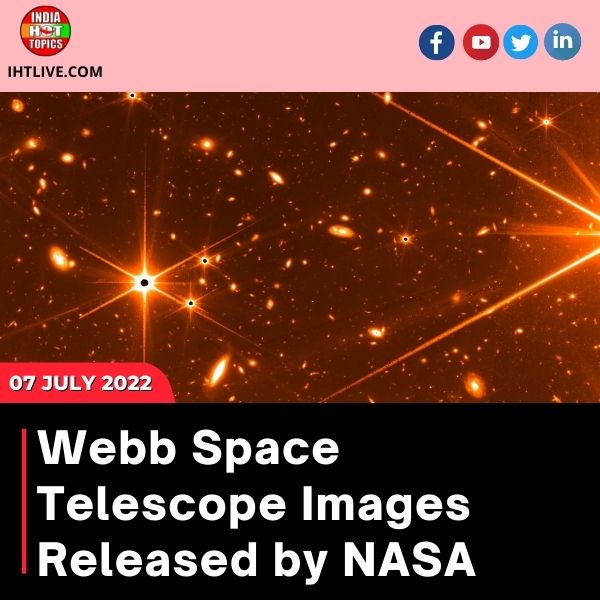 The first full-resolution photos taken by the James Webb Space Telescope will be made public by NASA in less than a week, marking an important turning point for the organisation. The company teased the imminent publication on its blog on Wednesday by revealing a small portion of an unfinished image that the space-bound device obtained early in its alignment process.

Captured with 72 exposures over the span of 32 hours, the orange image shows off the deepest reaches of space. "Gaze at this test image — an unexpected and deep view of the universe — captured by Webb's Fine Guidance Sensor in May," the Telescope's Twitter account wrote Wednesday.

Neil Rowlands, a programme scientist for Webb's Fine Guidance Sensor, claims that the images returned are of higher quality than anticipated.

"Early in commissioning we purposefully defocused the guiders by a little amount to help guarantee they exceeded their performance requirements," Rowlands wrote in the blog post. "With the Webb telescope producing better-than-expected image quality." "I was ecstatic to see all the intricate structure in these weak galaxies in this image at the time it was captured. Given what is now known about what deep broad-band guider images are capable of, it is plausible that in the future, if it is possible, such images, acquired in parallel with other observations, could prove to be scientifically valuable."

One of the four scientific instruments included in the Webb Telescope's design is the Fine Guidance Sensor, the only one that will be utilised in almost all of the telescope's missions during the course of its lifetime. The procedures are anticipated to start as soon as those initial photographs are made public.

The first pictures from the telescope will be of the farthest reaches of space, NASA administrator Bill Nelson confirmed earlier this year.

Nelson remarked, "If you think about that, this is further than humanity has ever travelled." "And we're just starting to comprehend what Webb is capable of. It will investigate solar system objects and the atmospheres of exoplanets orbiting other stars, providing hints as to whether or not their atmospheres might be comparable to our own."