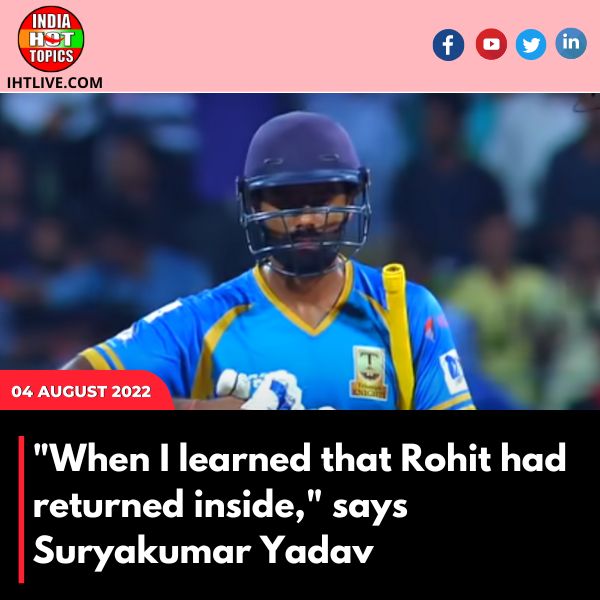 "When I learned that Rohit had returned inside," says Suryakumar Yadav

In the third Twenty20 International against the West Indies, Indian batsman Suryakumar Yadav scored a match-winning 76 off 44 balls while India was chasing a target of 165. Suryakumar improved his standing as a T20I player with his explosive innings and trademark unconventional shots, which helped India win the match by seven wickets. Suryakumar moved up to No. 2 in the ICC men's T20I batting rankings thanks to his 76, his valiant century against England at Nottingham last month, and a number of noteworthy innings. The choice to have Suryakumar start the innings was hotly contested, but after his half-century the other day, it doesn't seem quite so risky.

Suryakumar's performance was crucial, particularly given that Rohit Sharma, his opening partner and captain, left the field early in his innings after hurting himself. However, the daring batsman did not back off and launched an aggressive innings that completely demoralised the West Indies. In a cordial post-game interview with teammate Ishan Kishan, Suryakumar talked about his strategy and the agony of failing to score the winning runs.

"I was considering continuing to play until the very end. It was crucial for someone in the top three or four to bat all the way through, or at least for 12 to 15 overs to bat with purpose as we had decided, especially once I learned that Rohit bhai was back inside. I like to express myself when I bat. I played my usual shots, so that's what I did "Ishan was told by Suryakumar that the BCCI shared a video of the incident.

In the 15th over, when India still needed 30 runs to win, Suryakumar was dismissed. Suryakumar expressed his disappointment at not being able to complete the game and said he would use the experience to improve.

"We always talk about finishing the innings if a batter continues to play into the 14th or 15th over and 20 runs are needed, so I was a little disappointed that the game was not completed. This is how you learn, even though it didn't happen. I'll be fearless once more and relish the experience "Added he.