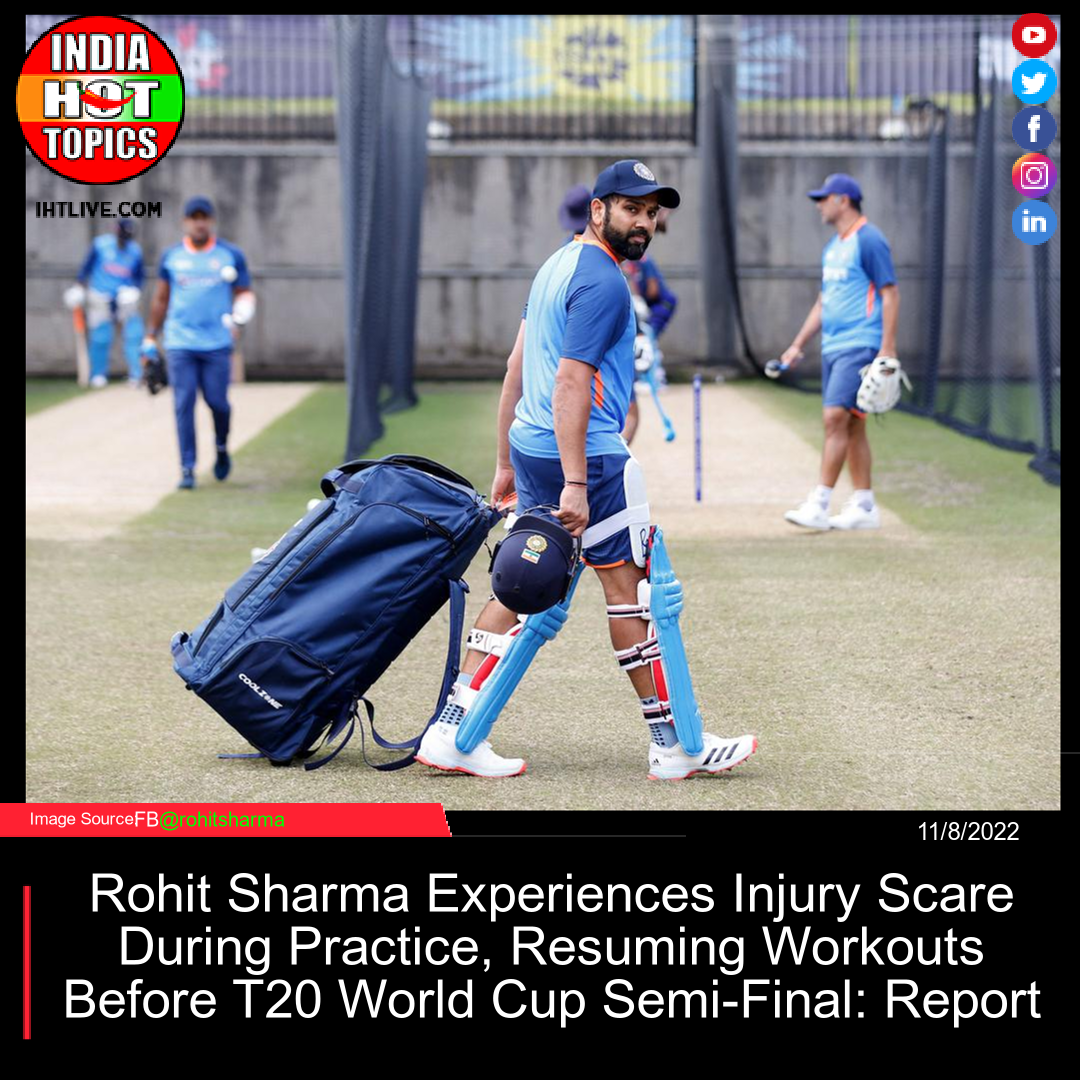 The Indian cricket team had a scare before their T20 World Cup semifinal match against England when captain Rohit Sharma took a hard knock on the forearm during practise on Tuesday. Fortunately, there were no significant injuries. A short ball flew off the length area and struck Rohit’s right forearm as he was going through his routine practise drills against the team’s throwdown expert S Raghu at the Adelaide Oval. The skipper, who attempted a pull shot but missed the ball, appeared to be in discomfort. Rohit resumed his exercise after placing an ice pack on the hurt arm and taking some time to recover.

According to team sources, the captain is doing good and is expected to play in Thursday’s semifinal match against England.

“When he batted for the second time, he didn’t have much discomfort. X-rays or CT scans might not be required. We also have a middle day that is an optional session. Right now, it doesn’t seem serious “a source familiar with the situation told PTI.

Rohit was seated on an ice box, watching the training session from a distance, and appeared to be in a great deal of agony.

He was observed conversing with mental fitness coach Paddy Upton for a sizable period of time.

After a while, Rohit picked up training again, but throwdown professionals cautioned him against going all out because he was largely practising defensive shots to ensure that his motions were natural.

Rohit and his obsession with sweeping bat shots

Rohit is fascinated by the visually appealing pull shot stroke, which has netted him many runs but also cost him some wickets.

Even in this competition, Rohit was dismissed trying to play the horizontal bat stroke against Bangladesh while getting out playing the pull-shot against Zimbabwe and South Africa.

Similar dismissals were also made against England in 2021 against Rohit. It is an inherent part of Rohit the player and has a high risk/high reward.

He spends the most of his training time practising the pull-shot, whether it is performed in front of or behind the square.

Even on Tuesday, after being struck, Rohit played a few pull shots with Raghu, who was able to get the ball to rear from length.

Only at JioSaavn.com can you listen to the most recent music.
The ability to coordinate your hands and eyes is one requirement for making the shot. However, execution may suffer as one ages since reflexes start to fade a little and reaction times lengthen by a fraction of a second.

Indian players should compete in foreign T20 leagues, according to a four-time

Since India’s humiliating loss to England in the 2022 T20 World Cup semifinals, there has